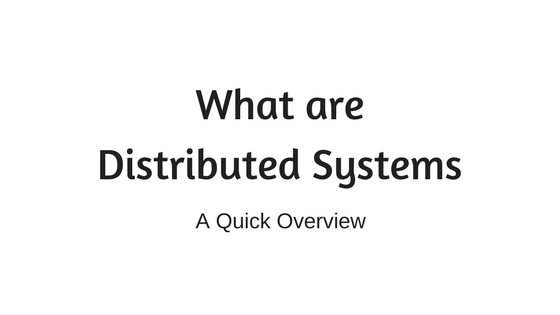 What are Distributed Systems?

How do they (computers) communicate?

How can computers be organized?

We can have a Client Server or Peer to Peer architecture.

Here we have a server which provides service to multiple clients.

It’s not just limited to Internet. Even on a single machine this model is applicable. Like a program may need inputs from user. So I/O module functions as a server to the program.

One problem here is that if server goes down then the requests won’t be served. So here our server becomes a single point of failure.

Another problem is if the number of clients increases then the performance will go down.

Client Server model is good for service oriented architecture. But when we want a set of computers to divide the load among themselves then Peer to Peer model is better.

This functions more as a distributed system where workload is distributed among the computers.

All computers participate in computation and they send and receive data.

If the system needs to store large amounts of data, it can distribute the same among computers which are participating in this setup.

I am Enthusiastic about Learning new things and sharing my Knowledge. I like programming and have a pretty good background in Computer Science. View all posts by codesmartly