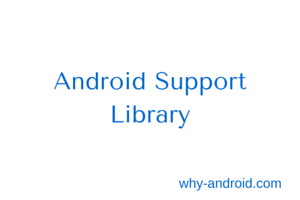 Android regularly releases Support Libraries, which are a bunch of features.

Android keeps on adding new features. Say you have an App which was created using an older API version and you want to add the new features, you can do so using the Support libraries.

So the purpose of these Libraries is to let Apps use new features of Android.

What does the number attached to Support Library indicate ?

Let’s take the v4 support library as an example. Now the number 4 in this indicates that this can be added to Apps which have been created with an API level greater than 4.

v7 appcompat library – Support for Action Bars. Can be included with API level 7 and above.

In the next lesson you will create a new Project “ThemeDemoApp” to get better understanding of these concepts.

I am Enthusiastic about Learning new things and sharing my Knowledge. I like programming and have a pretty good background in Computer Science. View all posts by codesmartly